Amazing Optical Illusions, and How They Work Optical illusions work by exploiting the disparity between what the eyes see and how the brain perceives that visual input. In doing so, they demonstrate that our visual systems “edit” what we see without us even being aware of it, as it decides what is worth paying attention to.

Even before humans understood the visual system as we do today, they created and were fascinated by optical illusions. Even today, we don’t know enough to explain how some of these fascinating illusions work.

Below are a few of these eye-twisting, and brain-fooling, illusions.

Focus on the crosshairs in the center of the image. After around 10-20 seconds, the lilac colored dots will start fading away to gray, while the dot that had previously been hopping around the lilac chain becomes a green dot, rotating in a circle.

Since, in the animated image, the lilac dots are stationary while the empty spot moves, after a short processing period, our visual system transitions to focusing solely on the moving blank dot. Due to a second illusion at play, the moving blank dot turns green. That is due to the retinas of the eyes becoming oversaturated with the lilac color from the dots we saw moments ago.When the lilac color is removed, what you see is its complementary color (a light green) in its place. Essentially, the green color is the result of white light with the lilac color subtracted.

The bar in the center of the image above appears gradated, changing from light to dark gray in the opposite direction as the background gradient.

Have you guessed the illusion yet? Perhaps you have. This is a case of your brain fooling itself. If you cover everything in the image apart from the bar, you’ll confirm that it is actually monochrome.

This illusion is caused by the brain interpreting the ends of the bar as being in different lighting, and from that determines what it thinks the bar would look like if evenly lit. Through this process, it decides that the left end of the bar is a light gray object in dim lighting, while the right is a darker gray that is well lit.

For this illusion, start by staring at the blinking green light in the center of the video for several seconds. You’ll notice that as you continue staring, the yellow dots around the light. One of them might disappear, only to reappear moments later, or first one fades, then the other two, only for all 3 to come back after another few moments. As long as you keep focusing on the blinking light, the yellow dots continually disappear and reappear at random.

This illusion is called motion induced blindness, and it was first discovered in 1965, but it wasn’t until 2001, when it was rediscovered and named, that it gained significant attention. While similar to Troxler’s fading, which we touched on above, it is considered a separate phenomenon due to the requirement of a moving background for it to work.

There is still debate regarding the cause of motion induced blindness, with at least 5 theories being proposed.

One recent theory, known as the perceptual scotoma, proposes that this illusion is another attempt by the brain to provide us with clear and accurate perception. Since the 3 dots don’t change as the background spins, the visual system takes them out of our awareness, since they seem to be in contradiction with how the visual system understands things to work in real life. So, it essentially treats those spots like blind spots in the visual field. 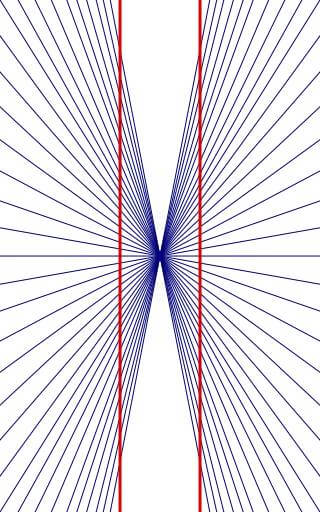 This mind-bending illusion, first discovered in 1861 by German physiologist Ewald Hering, makes it look like the two straight red lines in fact bow outward. According to Hering, the reason for this illusion is that when we see the red lines crossing over the blue ones that radiate outward, our brains overestimate the angle made at the points where the red lines intersect the radiating ones.

Current research hypothesizes that the reason for this miscalculation is that since there is a delay between the time light hits the retina to when the brain perceives it, we evolved to compensate by generating images of what we think will occur one-tenth of a second in the future.

So in this case, that predicting leads to the overestimation of the angles, which makes the red lines look bent when they are truly straight. (And if you don’t believe it, cover up the blue lines and take another look at either of the red ones!)

On this checkerboard, the squares labeled A & B appear to be very different shades of gray, right? However, when we look at the board again, this time with solid gray lines running along both squares, we can see that they were the same shade all along!

This illusion, published by Edward H. Adelson, Professor of Vision Science at MIT in 1995, demonstrates how our visual system deals with shadows. When we try to determine the precise color of something, our brain knows that shadows can be misleading, in that they can make a surface look darker than it truly is. So the brain compensates by interpreting the shadowed surfaces as being lighter, even though it’s the exact same color as an unshadowed object which appears, at first glance, to be much darker. 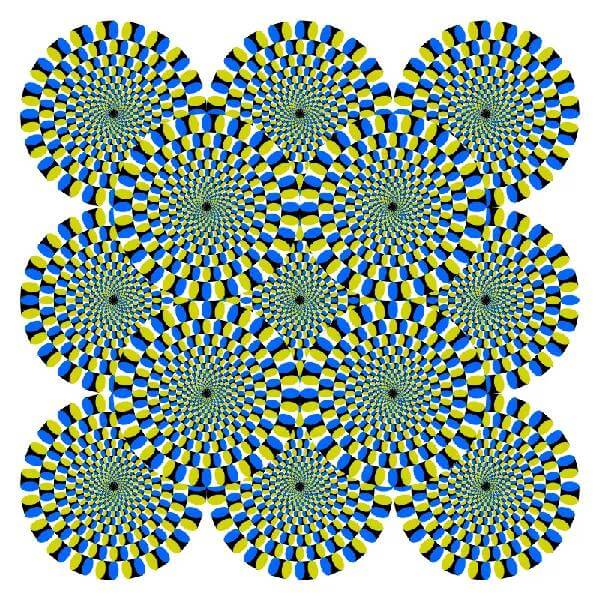 As hard as it might be to believe, nothing in this image is moving.

Unfortunately, there isn’t too much more we can tell you about this mind-boggling illusion.

To this day, there is no solid explanation for illusory motion. Some experts think it is linked to something called fixation jitter, involuntary eye movements which present the illusion that objects close to something you’re fixated on are moving.

Others believe that as you glance around the image, the motion detectors in your visual cortex get “confused” by dynamical changes in neurons, and thus believe that you are, in fact, seeing movement.

Illusions like this one serve to illustrate to us that while we know much, much more about vision than we did in the past, there is always more to learn!

These are just a few of the many fascinating optical illusions out there; demonstrations of just how fascinating our visual systems truly are.